LIGHTWEIGHT PISTONS (1984):  Vibration was always the killer and destroyer of cranks, cases and frames. After contacting Wiseco for a set of forged lightweight blanks for my 850 roadracer I ended up with 850 pistons that weighed less than 750 pistons which reduced stress and annoying buzz on everything including myself.  Original lightweight Wiseco pistons below right. 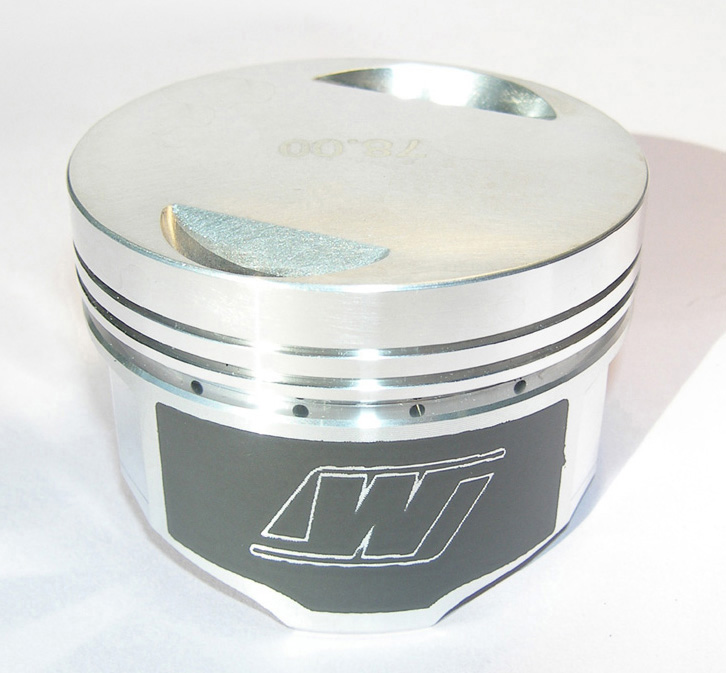 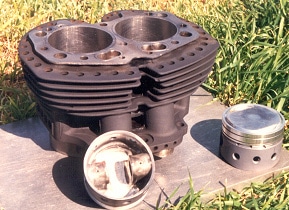 LONGER BUSHLESS RODS (2008):  News was circulating that high revving Nascar engines were using bushless upper end rods in combination with DLC coated wrist pins. I thought this would be a great way to reduce reciprocating weight and increase reliability. Carrillo did a beautiful job designing them for me. They work extremely well with the lightweight JE pistons and are one of the most successful upgrades for Norton twins.

THE REED VALVE SUMP BREATHER (1985):  Leo Goff was the first to use a one way (ball check) valve in the breather sump. When I heard about it I called him and he described it as an EGR check valve. I thought this would be a good way to evacuate excess oil from the sump and gain a few HP. So I went to Napa auto and bought what they had on the shelf – an EGR petal reed valve. I plumbed it up to the bottom of the sump and was amazed to see the oil pumping up the clear hose to the oil tank in a series of jerks with each down stroke.  That 1st version was too bulky so later on I changed to the BMW reed valve breather because of its compact size. Bike with the first reed valve sump breather

BELT DRIVE FOR RACING (mid 1984):  QPD was the first belt drive but their square tooth design was weak and only suitable for the street (the belt teeth would strip off on a racer). So I contacted Gates and they agreed to make me a one off round tooth Kevlar belt. I mounted a round chainsaw file in my die grinder and converted my QPD Clutch drum and engine sprocket to round teeth and went racing with the Kevlar belt. Later on I switched to Gates regular round toothed belts with no problems. I’m still using the same converted QPD round toothed belt drive setup on my street bike.

TURCITE AND TEFLON SYNTHETIC FORK BUSHINGS (1985):  To help keep the tire planted on the pavement for increased traction I first went to teflon fork bushings as shown below in my race manual (copyrite 1984). They worked so well that I started selling them. Later on I added the super slippery Turcite bushings which last much longer.

EXTENDED FORK BUSHINGS (1985):  Part of the Norton fork friction problem is due to the top and bottom fork bushings being too close together. The solution was to extend the upper bushings on Roadholder forks.

FORK DAMPING CARTRIDGES (1985):  The Norton dampers leave something to be desired. I liked the way my rear Marzocchi shocks worked so I took them apart, studied them and incorporated their components with damping cartridges that fit into the Norton Roadholders. Along with the synthetic fork bushings and monoshock – handling improved dramatically and I was able to cut seconds off my lap times.

MONOSHOCK RACING FRAME (1986):  After the Ducatti Harris TT2 frame hit the market it was obvious that the single rear shock was the way to go. So with a little help from a shock rep and measurements from the Harris TT2 frame I was able to create the first monoshock Norton racing frame. 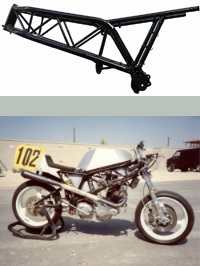 BEEHIVE VALVE SPRINGS FOR NORTONS (2009):  Beehive springs have been around for a long time (I first saw them on a 1960s small block Buick). Their lightweight and efficiency seemed obvious. When a suitable beehive spring became available I installed them in my street bike, tested them to 8000+ RPM and was the first one to put them on the market for Brit bikes. 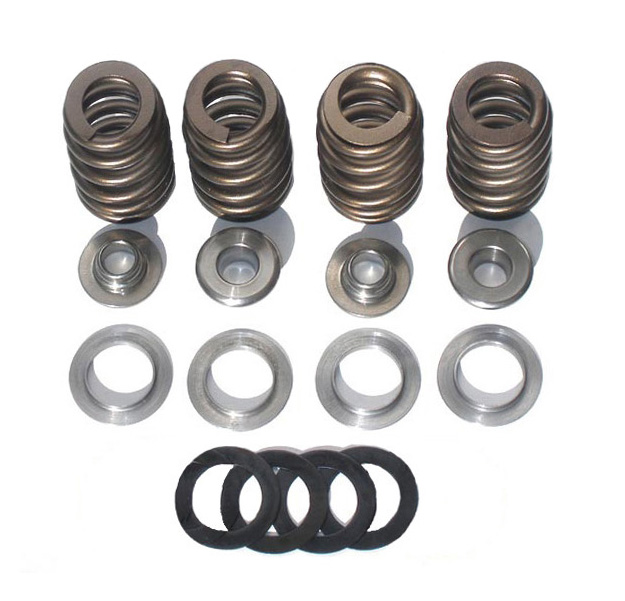 FIBERGLASS REINFORCED SILICONE GASKETS (2016):  “Road scholar” was the first to introduce silicone gaskets for Norton valve covers. But they would squish out, lose their tension and leak. I fantasized about a silicone with fiberglass or some other filler that would keep the silicone from compressing. After a bit of research I was amazed to discover that such a material actually existed. I bought some samples, cut them to fit and they worked great – the answer for Norton gasket leaks.

VARIOUS THICKNESS HEAD GASKETS (mid 2008):  Ron Wood told me he was milling copper headgaskets down to .020” for his winning flat tracker. When the time was right I had them cut in various thicknesses from .020” to 1/8”. Ron also told me about high temp pliobond sealer which has turned out to be the best sealer available for Norton head gaskets. 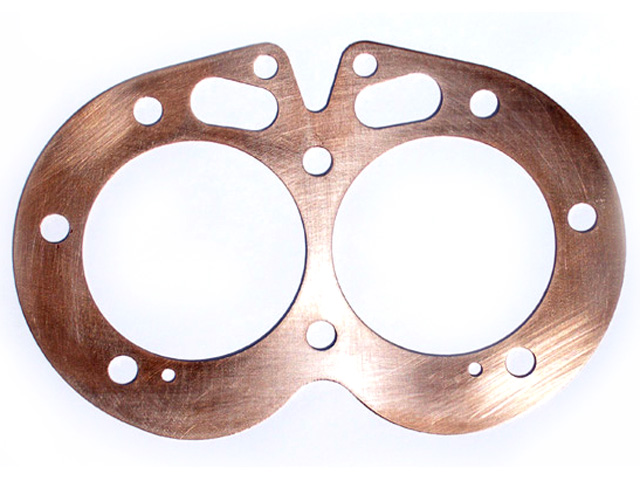 CAMS FOR LIGHTWEIGHT RADIUSED LIFTERS (2008):  These first came out on some Norton sponsored dirt trackers. My friend Ken Canaga told me that the wear problems we were experiencing with our flat tappet cams simply wasn’t happening with the BSA/Triumph tappets. These lightweight tappets are about ½ the weight of the heavy Norton lifters and valve bounce is reduced. It was a no brainer to make cams available in various profiles for Nortons from street to full race.  Now there are four JS cam profiles and each has an assymetrical design with a gradual closing ramp to reduce valve bounce – the result of many hours of refinement using John Andrews cam design software. 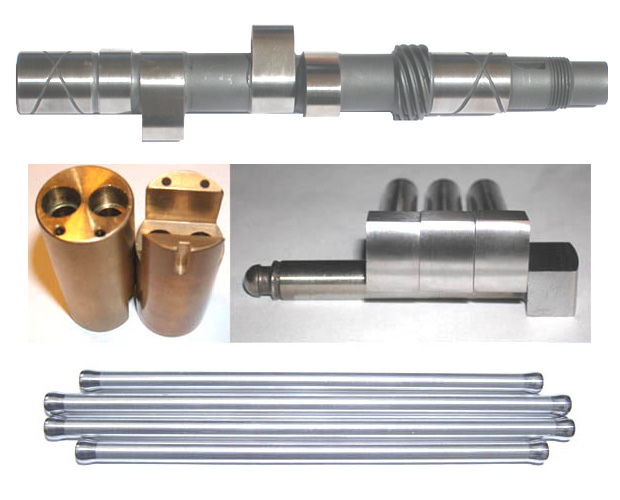 GAPLESS RINGS FOR NORTONS (2008):  These seemed like a good idea to offer along with the lightweight pistons. After 50,000 miles I still have a tight ring seal – no smoking, excellent leak down and low oil consumption.

REDUCED SHANK HEAD AND CYLINDER BOLTS (2008):  I stumbled onto these by accident when the engine studs I ordered came with reduced shanks. They went into my head and allowed the bolts to stretch in the same way that reduced shank rod bolts can stretch. This helps avoid stripping the threads out of the head. Now the reduced shank bolts are available throughout the top end in high tensile strength.

GUILLOTINE FLATSLIDE CARBURATORS (1985):  I designed and fabricated these 40mm carbs with a long tube across the carb bore that fed fuel though a series of tiny holes as the throttle was opened.

SCREWDRIVER SLOT FOR JOE HUNT MAGNETOS (2012): A simple screw drive slot cut into the armature allows you to time the mag before tightening the spocket nut – making this operation a much easier job.

6-1/2″ WIDE REAR RACING SLICK (1985): After chasing Tony Guest on his Ducati with his wide racing slicks I decided to copy his setup by staggering my transmission to one side to get the necessary clearance. After that I was able to achieve extreme lean angles and drag my leg all the way down to the ankle.

NORTON RACE MANUAL (1984): After collecting so much information for setting up race bikes I decided to make it available for everyone. Special thanks to Mick Ofield and Ken Canaga who contributed so generously.

PORT SLEEVES TO CONVERT 32mm RH4 HEADS TO 30mm RH10 (2022): For increasing flow velocity of RH4 heads and upgrading them to the performance level of RH10 heads (increased midrange with no loss of top end power for street bikes).